More and more Koreans like to travel abroad. The GDP per capita is increasing (graph is below) so more Koreans want to enjoy their holiday abroad. On average, a Korean visitor to the U.S. spends approximately $4,900 per trip. In 2018, over 28.7 million Koreans, more than half of the population, traveled abroad (up 8% from the previous year). 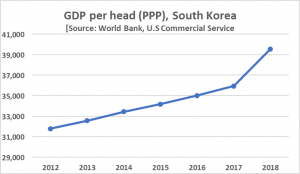 Where Koreans get info about their holiday

In the graph below, blue bars are families and orange bars are single travelers. The average number of days per trip is 4.62 days travelling overseas. Koreans like to vacation during holidays (Christmas & New Year’s Eve, Korean Thanksgiving and Lunar New Year) and there are some destinations that are more popular than others. What are some other behaviors?

The majority of Koreans use packages when traveling in foreign countries, but so called “free travel” is becoming more popular with young people. All in one packages are usually bought 2-3 months before leaving.

Main purposes of traveling abroad are: 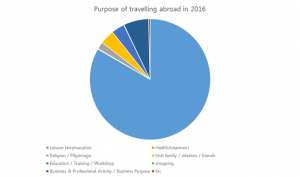 The most popular activities are: natural activities, relaxation and food tours.

What are some Korean outbound travel statistics?

There are several ways to get info about Korean outbound travel. Hanatour (http://www.hanatour.com) is the biggest travel agency in Korea and stock listed, so you could consider their data present current traveling trends in Korea. According to Hanatour’s website, the most popular planned travels are mainly to Southeast Asia:

Below are some statistics about the behavior of traveling Koreans:

So, because Koreans’ holidays are short, they like to plan everything in detail beforehand (reading reviews) and / or book a packaged tour. Therefore, we suggest to post blog articles (reviews) on portal sites like Naver. Some overseas restaurants do not have any reviews yet, in Korea. Overseas tourism is very seasonal Koreans generally are used to a relatively high service level. For example, there is no service tip culture in Korea – tip is included in the price.
Authors: HY L, Lim Hyeonsuk, and JK Song
Graph sources: Korea National Tourism Survey by The Ministry of Culture, Sports and Tourism 2018 and 2016

Ask us about the digital marketing strategy to help reach your organization's goals. Contact us now!

Your message has been sent.